My primary artistic influence has always been comics. I devoured them as a child, reading them cover to cover then grabbing a pencil or pen and drawing my own stories on any bit of paper I could find. It's fair to say, however, that I was also influenced and inspired, in no small part, by the imagery of fantasy gaming. Now, since I was a bit of a solitary sort, this meant that I spent a lot of time reading issues of White Dwarf with no real understanding of what the articles were about, as I wasn't playing the games. For kids like me, there was also Fighting Fantasy, which allowed us to pretend we were playing Dungeons & Dragons, even if we had no mates. The books also had some great art -- and let's be honest, the art was often much better than the story/game in the text -- and because the British game industry was a bit isolated and incestuous back then, you'd see the same artists popping up in different publications from different companies. As a result, British gaming products of the time developed a unique look, quite distinct from the visual style of the American gaming culture.

So while the Americans would be getting this: 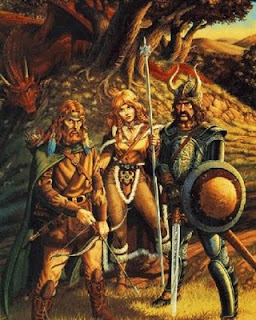 We'd be getting this: 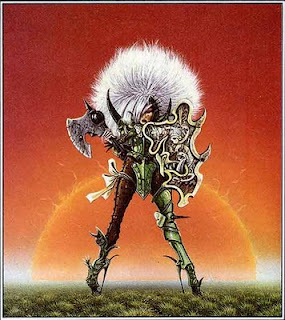 One of my favourite artists from that time was Russ Nicholson, whose work combined an eye for fine detail with a talent for making the fantasy seem eldritch and strange. His style wasn't all that similar to that of John Blanche or Ian Miller, but they all shared a proper evocation of the weird that you just didn't see in American fantasy art.

I was pleased to discover that Nicholson was not only still working, but had started a blog, and when he ran a competition to win a piece of original art, I jumped at the chance. 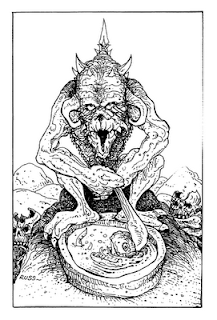 I've never been one for chasing original art, and I'm not sure why, as it's great to have a piece by one of my favourite artists. Thanks Russ!

PDF
Posted by thekelvingreen at 22:13