Ever since I got it in my head to run the Eberron setting using Savage Worlds I knew I had to one day try to fit dragonmarks into the game. It was fortunate that none of the players requested a dragonmarked character, which has allowed me some extra time to come up with the following rules. These are the general guidelines for using dragonmarks in Savage Eberron; specific rules for the individual marks will appear later.

Dragonmarks are purchased as Edges, per the usual Savage Worlds rules, and there are four varieties: Least, Lesser, Greater and Aberrant. A character selecting an aberrant mark cannot ever choose another type of mark, nor can a bearer of a standard mark ever pick the aberrant mark. 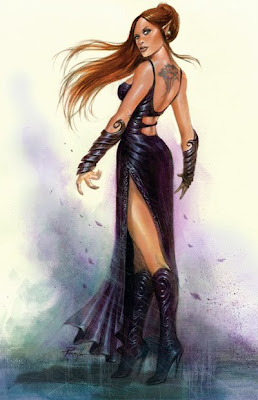 Each of the standard marks provides a bonus to a Trait roll, as well as a magical ability which can usually be used at least once a day; aberrant marks lack the Trait bonus, but do bestow a magical ability. In both cases, this ability costs no power points, uses no components and operates as if the minimum number of power points had been spent; for example, the Mark of Handling bestows the Beast Friend ability as if 3 power points had been expended. Dragonmark abilities use their own skill and have no linked attribute, just like superpowers; this skill starts at 1d4 and can only be increased by upgrading the dragonmark itself.

Bearers of the standard dragonmarks are almost always members of one of the great dragonmarked houses, but receive no special treatment unless they also have Edges like Noble or Connections. On the other hand, it is possible to have Connections within a dragonmarked house without yourself manifesting a mark.

LEAST DRAGONMARK
Requirements: Novice; Human, dwarf, elf, gnome, half-elf, halfling, half-orc.
Choose one of the twelve available dragonmarks; you gain the bonus associated with the mark, and may also use the mark's spell-like ability once per day.

LESSER DRAGONMARK
Requirements: Least Dragonmark; Seasoned.
Your mark is more powerful than normal. You may choose one of the following effects: 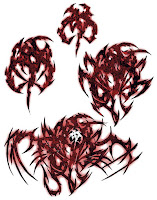 GREATER DRAGONMARK
Requirements: Lesser Dragonmark; Veteran.
Your mark is among the most powerful known. The effects of this Edge are identical to, and stack with, those of the Lesser Dragonmark Edge, above.

ABERRANT DRAGONMARK
Requirements: Novice; Human, dwarf, elf, gnome, half-elf, halfling, half-orc.
Your mark is strange and unusual and resembles none of the standard twelve dragonmarks. Your mark mimics one of the following powers (roll 1d6):


It's not all good though; here's a Hindrance to go with the Edges:

DRAGONMARK OUTCAST (MINOR)
For some reason, your connections with your dragonmarked house have been severed. You may have been thrown out for some indiscretion, or perhaps they are simply not aware of your existence. You cannot call in any favours from the family, but other houses will still see you at best as a rival and at worst as a spy, so you cannot go to them either. When interacting with the dragonmarked houses, you operate as if you have the Outsider Hindrance.

PDF
Posted by thekelvingreen at 22:11