Straying From the Path

I have been surprised with how much I've been enjoying Pathfinder. As I may have mentioned before, I've never really been a D&D player -- because, you know, Call of Cthulhu is better -- and I'd parted ways with the gaming hobby during D&D3's lifespan, so all I had to go on was stories of how popular the third edition was, how annoyed people were by the seemingly-opportunistic move from D&D3 to D&D3.5, and how the whole thing got a bit unwieldy under the increasing pile of rules supplements.

So when our group made the decision to move from D&D4 -- hereafter referred to as The Unmentionable -- to Pathfinder, I was wary, but I thought it was only fair to give it a try and see what it was like for myself.

The Pathfinder core book is a massive thing -- bigger than Rogue Trader, which was intimidating enough -- and the rules have a lot of working parts, and yet it remains quite fun to play. I suspect that this is because I've been playing as a monk, a relatively simple class; the two players who chose spellcasters are often wrangling with specialist rules and long periods of spell list preparation, all of which would be beyond my feeble mind. It's also perhaps significant that we've been playing for a while now -- we must be coming up for a year -- and we're still getting rules wrong, so it's fair to say we haven't mastered the game. Even so it has been fun, and I have no complaints, whereas by now I was ready to mutiny in our The Unmentionable game. 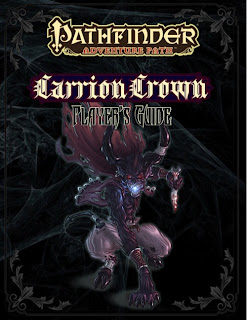 Paizo have just begun publishing a new Pathfinder campaign -- sorry "Adventure Path" -- called Carrion Crown -- I feel there should be a definite article there -- which owes more than a little to the old TSR Ravenloft setting, and as a horror fan, it did pique my interest just a tad. It was suggested that once we finish the Kingmaker cam... Adventure Path, we move on to this new one, and furthermore that I run it. This seemed like a fair idea.

Then I ran Carrion Hill.

What I discovered was that while I enjoy playing the game, I do not like running it in the slightest, as there's far too much stuff in there. Now, one might say that you don't have to know or use all that stuff, and that's true to an extent, but there is an undeniable feeling of obligation when you know that the rules are there, just waiting; what you get as a result is a tendency -- despite the best of intentions -- to pore through the massive four-billion-page Pathfinder rulebook to discover the correct procedure for applying fire damage to pickled gherkins, and then the game falls over dead. In other words, you could concentrate on getting the core mechanics of fighting, skills and magic right and just handwave the rest, but you'd know you were doing something wrong.

As such, while I would like to run (The) Carrion Crown, I would rather run it with something simpler like Swords & Wizardry or Labyrinth Lord -- the difference between them and D&D3/Pathfinder is more one of detail than mechanics -- but alas I know my group would never go for it, not in a month of Sundays. Not that I would use S&W -- for example -- as is; I'm quite fond of the options Pathfinder characters have, so my ideal situation would be to use the simpler game as a frame for all the major mechanics -- gherkins burn on a d6 roll of 5+ -- but front-load the complexity into the characters, perhaps even use the Pathfinder classes as they are, with minor tweaks for compatibility. I've even entertained the possibility of completely bespoke characters, so while there's no dhampir race or rogue class in S&W, I could build a one-off dhampir rogue for the player who wants one.

This would be the best of both worlds for me: lots of options for the players to mess around with, but the minimum of fiddly bits for me to wrestle with as a GM, so I can get on with the plotting and the silly voices. At the end of the day though, it's all theory and wishful thinking, as I don't think it'll fly with my lot. On the plus side, it means I get to play in (The) Carrion Crown; I'm considering a wererat barbarian or -- if I can get away with it -- some sort of zombie.

PDF
Posted by thekelvingreen at 23:40