Right, so in the first post, I went through White Dwarf #67 and pulled out most of the material suitable for use in a game; now I'm going to try to hammer it into a campaignish sort of shape.

Right away I realise I have a problem: I have no map. Of the games I have to hand, Rogue Trader has a starmap, but one that's already well stocked with detail, and I'm not that fond of the sample map in Labyrinth Lord; it's a decent enough campaign map, but I'm not getting the right feel from it in this case. Instead I'm going to see what I can build from the material in the magazine, which also lets me off the hook in choosing a system for all this, as I'm still not ready to make that choice yet.

So, what have we got? There's some setting information in the adventure A Murder at Flaxton; aside from the titular village, we're told of the towns of Brecor to the north and Zerler to the south, as well as another nation across the sea, called Veridor. So that's the starting point, and I think I'll also use that advert for Games Workshop stores -- the one with the parachuting pygmy orcs -- and convert the seven shops into settlements in the game world. Quick and dirty campaign map below! 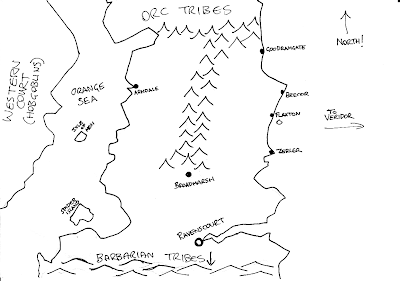 I've already identified hobgoblins and orcs as major humanoid races in the setting, and there are enough dwarves in the magazine to make them the third racial group. Humans are conspicuous by their absence -- although I suspect distant Veridor is a human nation -- but we've got a barbarian culture to put somewhere, so let's make them humans.

For some reason, D&D hobgoblins have this east Asian -- Mongolian usually -- aesthetic, so let's use that and combine it with the samurai and ninja miniatures we uncovered in the previous post. Our hobgoblins then are generic Oriental types, which ties in with the Peking Duck adventure; we'll set that in our capital of Ravenscourt, which is cosmopolitan enough to have a hobgoblin restaurant, and the Tongs in that scenario are now a hobgoblin criminal gang. Let's also turn the scenario's mafiosi into dwarves; we'll call them the "Iron Ring" and their chief enforcer is a dwarf nicknamed "The Juggernaut" for his special ability to smash through any obstacle with ease.

The head of the Iron Ring is a dwarf named Silenjax, who has made many an enemy in his time. What follows is an actual classified advert from this issue:

Rukin, hobbit extraordinaire, seeks vengeance on Silenjax, dwarven scum. May your beard grow lice and wither, you disgusting relation to Jock the American.

These in-character small ads were a much-loved part of the old Dwarf, and they reappeared in the mid-1990's with the gaming magazine Arcane. Did Dragon have something similar?

Ravenscourt is also abuzz with talk of the upcoming election. The current Lord of the Living Stone -- essentially the dwarven king -- is developing a reputation for being rather addled and absent-minded, with the Stone Parliament grumbling incessantly -- behind layer after convoluted layer of etiquette, of course, because it just wouldn't be seemly to openly criticise the Lord -- about this or that gaffe he's made. The Iron Ring have no wish to lose the freedom they've enjoyed under the incompetent rule of the current Lord, so they'll attempt to rig the election so he stays in power.

As an example of the government's impotence, a village not two days' ride from the capital has been the subject of raids by a mysterious warrior, and the populace has had to resort to hiring mercenaries such is the lack of decisive action from the government. We'll slot Thrud and Lymara in here.

To the north, Broadmarsh is the site of the Monster Colosseum, where all manner of exotic beasts are brought to fight in the arena for the entertainment of the crowds. People travel from all over the kingdom and beyond to watch and take part, but there have been grumblings -- again, not open criticism, for we are dwarves, not uncouth barbarians! -- of late that the prices for entry are too high; a number of interested parties, including both hobgoblin Tongs and the Iron Ring, are looking to get involved in a rival setup, and players could take advantage by capturing monsters out in the wilderness and selling them to the highest bidder. They might even get involved in setting up their own arena. The smugglers/slavers from A Murder at Flaxton are probably involved somewhere too, and the highest bounty of all has been offered for the legendary, possibly mythical, Jabberwock.

Recently, two adventurers named Critchlow and Harrison, one a warrior and one a wizard, went to capture a green dragon for the colosseum. The manager of the arena took it as a bit of a joke at first, but is now a bit worried about them, particularly as the wizard Harrison is an impulsive sort given to random and unpredictable behaviour; we'll work up some kind of random table for him.

The dwarf kingdom exists in an uneasy peace with the hobgoblin nation -- which we will call the Western Court, after the location of Games Workshop's Birmingham branch -- while the human barbarian tribes wander about in the southern regions, and orcs roam across the northlands; the orcs have of late been using unusual tactics -- such as parachutes -- in their raids, the result of one of their chieftains being possessed by an insane spirit that is trying to turn the greenskins into an army of conquest. I'm thinking that it's the spirit of some old crackpot inventor who was never taken seriously in life, and is now exacting vengeance through weird science and gonzo tactics. The orcs don't mind that old chief Jukka -- name pinched from the classified ads -- has gone a bit funny, because the raiding and pillaging is even more fun as a result.

That spirit is not the only one causing trouble across the land. A banshee plagues the town of Arndale, her cries causing a death each night, while across the mountains in Goodramgate, the people not only have to contend with parachuting orcs, but also a spectral black hound with fiery red eyes and a tendency towards PSYCHIC VIOLENCE. Further south, not even the famed soldiery of Broadmarsh can do anything about the malevolent Will-o-Wisps haunting the town's outskirts, driving away trade and leading travellers to their doom. Even the capital itself is suffering, as poltergeist activity is on the increase in Ravenscourt, yet another crisis for the Stone Parliament to watch unfold, powerless to intervene. 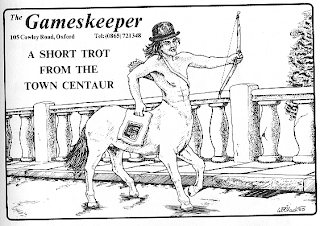 These baleful undead should be trapped on another plane, locked away by the magic of the Vivimancer Agaard -- name borrowed from Paul Agaard, Games Workshop's new (in 1985) events manager -- but the Vivimancer has grown bored of his lot and has let these beings go loose, in the hope that they will be tracked back to him in his lair on the plane of Elysium and he can be given a final death. Agaard's house servant is a centaur called Cowley. Cowley likes to wear a bowler hat as he attends to the Vivimancer's flower gardens, and I imagine him to be your typical snooty and superior Jeeves type, only a centaur.

As an aside, I discovered that The Gameskeeper is still there today, so well done to them!

As luck would have it, deep in the barbarian lands to the south is a portal to other planes and dimensions. It is in the control of a beautiful but excessively violent woman named Ashley who goes to battle sky clad and swinging twin broadswords; she has managed to get the portal to work in one direction, plucking warriors from across the multiverse -- here are our GURPS lot -- to fight at her side, but her true goal is to use it to escape this world.

The other barbarian tribes are either unaware of Ashley's plans or are busy with other concerns; the fifty-year-long autumn is due to come to a close, and the druids and shamans are turning their spiritual energies towards preparing for the Long Winter to come, as they cannot merely flee underground like the dwarves. They also have to deal with a beast they call Hiihtajantie -- name again stolen from the classified ads -- a vast purple gargoyle-like thing which has of late been stealing livestock and even the odd tribesman. Hiihtajantie is the size of a dragon, and the glowing lights which orbit its head are said to have a number of magical effects, including hypnosis. As the barbarians are an insular sort at the best of times, the arena owners up north haven't yet heard about Hiihtajantie the Disco Beast.

That's enough to be getting on with, I think. I've used almost everything from my initial list, and I've discovered some more bits and pieces while doing so. I'd start the campaign off with A Murder at Flaxton, then there are plenty of options for the players to explore. They could get involved with the organised crime element, engage with the politics of Ravenscourt, or spend their time monster hunting for the colosseum. At some point they might run into the ghost problem, which would then lead on to some planar travel and a big fight with an astral hippie. As for a system, I still haven't made that choice, although I'm leaning towards some kind of BRP variant, perhaps RuneQuest or maybe the core BRP book itself. That said, there's enough common ground between BRP and D&D that one could convert the Call of Cthulhu and RuneQuest material over with relative ease.

So that's that. I have too much gaming on my plate as it is, so I don't think I'll be using this any time soon, and as such I release it to the community. Do with it what you will!

PDF
Posted by thekelvingreen at 17:49