Oh look, I'm going to be writing an adventure for the Lamentations of the Flame Princess role-playing game!

"The Tenebrous Hand don't rule the city, but they may as well. If they can't bribe you, they can sneak into your home and threaten you and yours. That's why they get away with it. But you know what I think’s fishy? No one's seen one of their men for a while. No one's been collecting the protection money and I've got this constable mate who says that there aren't so many robberies these days. I’ll tell you another thing: he also says that the people in charge are more worried than ever, because if a thief's going through your pockets, you at least know where he is, you know what I mean? And you’ve got to wonder, if the Hand really are gone, then what’s happened to all their loot?"

It’s nice and ominous, but it doesn’t tell you, the buyer, much about the adventure, does it? At the same time, I don’t want to spoil things too much; I want to surprise you -- I hope in a good way -- when you open the book and read it for the first time. So what can I tell you?

I can tell you that the chief inspiration behind Horror Among Thieves is the work of John Carpenter, in particular his remake of The Thing. There’s a bit of Escape From New York and Big Trouble in Little China in there too, and just a tiny smidgeon of Prince of Darkness. Attack the Block, which is not one of Carpenter’s but may as well be, has exerted some influence too. If the adventure had a soundtrack, it would be full of ominous synths. 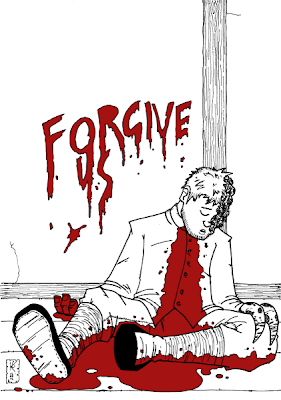 As I’m also responsible for the art on this project, I’ve got the opportunity to do more than just illustrate the text; I want to create a closer relationship between images and words than we tend to see in role-playing adventures. It’s a lofty goal, perhaps, but after reading Vornheim, I know that there’s more we can do with the format of these things. I hope I’m up to the task, and I hope you’ll join me in finding out.

So, if you want to know what happened to the Tenebrous Hand, what they have hidden in their vault, why that unfortunate fellow over there is so keen on forgiveness, and what the heck the Brotherhood of Pus is, then pledge $10 or more and you’ll find out.

Whether or not this campaign makes its goal, anyone who contributes at least $10 will get a pdf of the adventure; if the campaign is a success, the full weight of the Lamentations of the Flame Princess design and layout team will be thrown behind it and you’ll get the fancy pants edition detailed on the campaign page. If not, then I’ll be putting it together myself and it won’t look half as good, but you will get the full text and all the art; all the content just as if the goal had been reached. That’s my small way of showing my thanks to you for showing your support.

PDF
Posted by thekelvingreen at 17:03