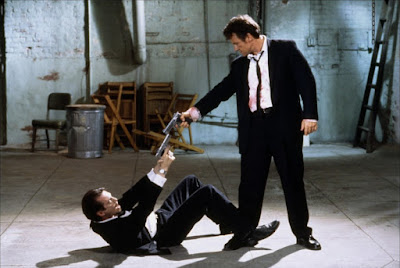 As we are still in the midst's of ongoing Southern Rail transportation chaos, it has been difficult for a few members to get to the club both regularly and in anything like a normal time frame. GM Rob summoned enough spirits to continue his Numenera but GM Jack was hijacked on the buses last week  as they are taking a lot of strain locally from the rail network disruption. We did take the opportunity to have a crack at another random card game though, in this case, Good Cop, Bad Cop. 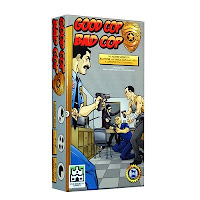 If  you like games of paranoia and allegiances then this one may appeal. Everyone starts with three random down cards that are either honest or crooked cops - the majority that you are holding determine your alignment. There is a KingPin card hidden in someones hand for the bad guys as well as an Agent card for the law enforcers and the aim of the game is to locate both of them and kill the one that is the head of your opposing faction.

Initially players can turn over one of their opponents cards and  in the investigation stages of the game - this is standard as the players slowly piece together who is on what side. Then as knowledge and possibly paranoia grow, players can then take guns instead of drawing actions or exposing cards. Among other things the action cards do things like change the order of play, interrupt the moves of opponents or my favorite 'plant evidence' when you can invert the allegiance of a player. As the guns come out then they get pointed at a someone but as people put more guns on the table as the game continues a Mexican standoff is created and whichever side's leader gets killed first (shot twice) ends the game. 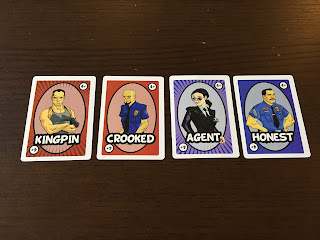 Its fun and fast but to be honest its not very interactive initially as there is a long quiet stage when people mutter to themselves as they piece the picture together. You cant say anything as you dont know much for sure and nor do you know who is on your side. The play suffers from a lack of social element and the designers needed to have considered this as players share a faction, it would have been better for them to interact earlier on to increase the paranoia and build knowledge. However it passed the time quickly and even if a player gets shot and is out of the game, he still has a stake in watching his faction fight on. 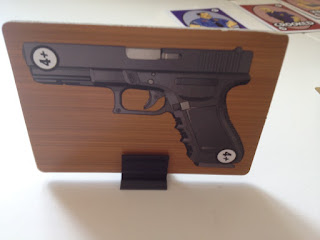 I suspect we will be in for a few more weeks of travel madness so keep a card game handy just in case...