I'm sorry. I know I shouldn't approve of such things, as role-playing games are a Serious Business, and things like this make our hobby look silly and immature, but I don't care. I ran a D&D4 cleric using a Lego Indiana Jones as my miniature -- both characters had hats, which was enough for me -- so that should tell you where I stand on such matters. 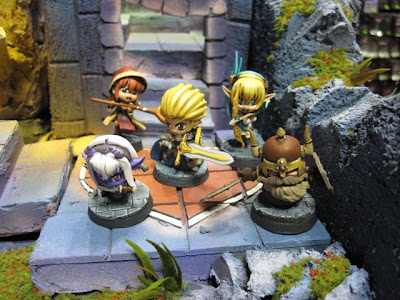 On a more serious note, the Japanese console rpg is a big part of gaming culture now, and is likely more influential than the tabletop hobby, so it's only fitting that the visual style of the former should cross over into the latter. I'm only surprised that it's taken so long. The miniatures come from Sodapop, and are part of their upcoming Super Dungeon Explore board-role-playing-hybrid game, but will be available separately.

PDF
Posted by thekelvingreen at 13:39