Fight On! #12 Released in Print and PDF! 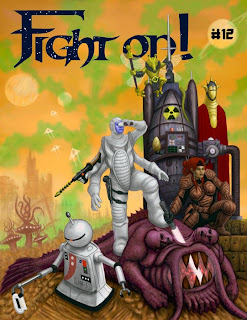 If you buy by the end of the day TOMORROW (July 15), you can save even more on all of these – lulu is offering a site-wide discount of 20% off everything with the coupon BIG (BIG305AU, BIG305UK for some foreign readers), making this one of the best times to check us out for the first time or check back in if you’ve missed a few issues! While you’re at it, check out some other lulu gaming products – there is a ton of good stuff on there from all kinds of producers.

Thanks for your interest, and whether you pick up an issue or not, keep fighting on!

(I should mention that I have some art and a comic in this issue, so this post has a hint of self-promotion to it.)

PDF
Posted by thekelvingreen at 23:02