Stuart was home alone over the weekend, so a couple of us went over to his place to play the second scenario in the Orc's Drift campaign. Ric had observed the last few rounds of the first battle and is a veteran Warhammer 40,000 player -- discussion turned to that after the game, and if we can scrape together some armies, we might have a battle, perhaps using the Killzone skirmish rules -- whereas I'd played the orcs last time, and Stuart once again took the role of referee. Ric gave me the choice of armies, and since the first scenario was weighted towards the orcs, I decided to play as the defenders this time, a small group of dwarven gold miners. 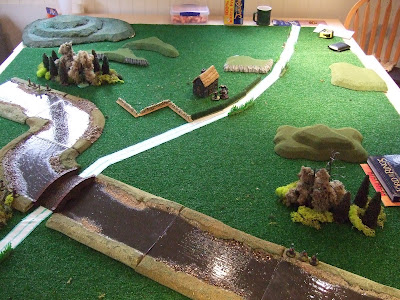 You'd be forgiven for not spotting the dwarves in this picture, as there are only about eleven of them, whereas the orcs brought this lot along: 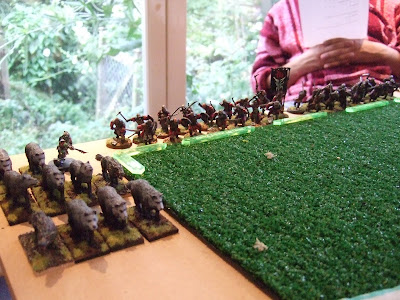 Faced with that level of opposition and remembering how the elves had been slaughtered almost to a man, er, elf last time, I was not confident at all in my chances of survival. My mission was to get six sacks of gold off the table, and I knew that my only solid tactic was to hold the orcs at the bridge for as long as possible. I had a choice of where to put my leader, and I decided to start him with the gold so he could get loading the mules as soon as the game began; I was worried that I was wasting a strong character when he could have been better used at the bridge, but I felt that my priority was to get the gold away. 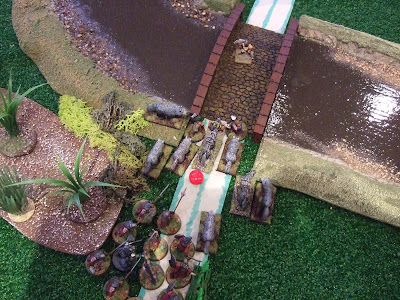 It turns out that the combination of dwarven resilience and a natural bottleneck was quite effective, and these four held the bridge for a number of turns, until the orc chieftain waded in and cleared the opposition away. With the bridge won the greenskin horde could pour across into the open land beyond, and I started to worry that all was lost; there was a definite palpable feel of the tide turning. 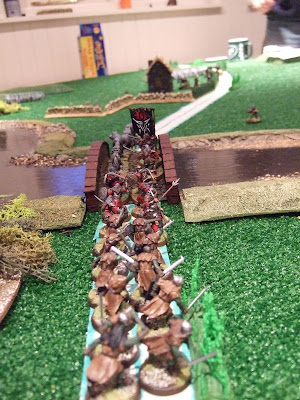 In the far distance there, you can just about see the dwarves loading up the mules -- and some Jaffa Cakes -- while a bit closer there's a lone dwarf crossbowman who would turn out to be something of a hero, battling about eight orcs over the course of the game before falling in the last few turns. Meanwhile, the bulk of the orcish warband headed for the vulnerable pack mules, and in desperation, I sent the dwarf chief and his son to block the road. This would be my last stand, and I hoped it would buy enough time to get at least one mule off the table. 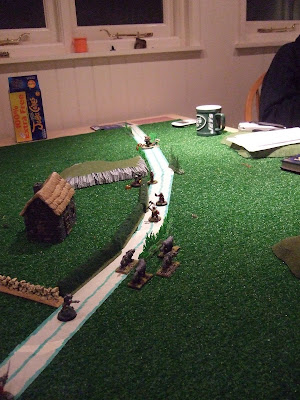 The chief's son went into a bit of a berserker rage -- we were using Games Workshop's Lord of the Rings rules, as they better reflect the skirmish-level scale of the campaign than the current incarnation of Warhammer does, and one aspect of those rules is a pool of points that hero characters can use for special attacks -- killing the hobgoblin beastmaster, then doubling back to finish off the wolves that had sneaked past to menace the mules. Meanwhile, Dad waded into the midst of the orcs, swinging his magic axe: 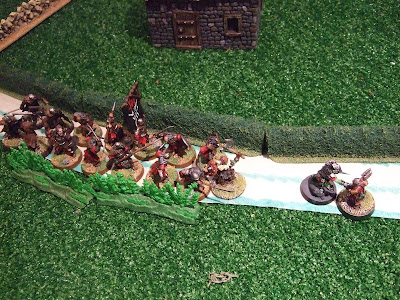 Back near the river, nameless crossbowman #2 fought for his life: 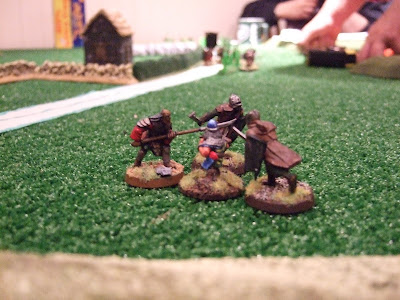 By this point Ric felt that he had lost the battle, although I was still concerned about my chances. As it turned out, my victory condition was to get the gold off the table -- which happened quite soon after the two dwarven heroes entered the fray -- whereas Ric's goal was to wipe out the dwarves, a task which proved rather more difficult to achieve. His orcs couldn't get past the chief and his son, even with force of numbers and their own hero in the fight, and although the son did get cut down, the father remained, chopping away until the orcs started to fail their morale rolls and began to flee.

With the gold safe and the orc horde legging it, the final fight came down to this: 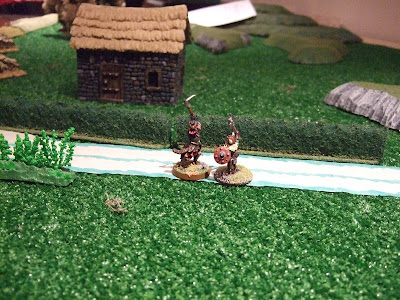 The dwarf chief, no doubt angered by the loss of his son, cut down his orcish counterpart in short order, then watched the rest of the greenskins flee into the sunset.


We learned that dwarves in the LotR ruleset are quite tough. This is fitting and worked well in terms of the scenario, with the bog-standard dwarf warriors holding the bridge against the orcs for a good few turns before the chieftain took an active role. On the other hand, we agreed that the heroes were rather too tough, and Stuart revealed that the father had been given the statistics of a dwarven king, while his son stomped about using Gimli's numbers; the next time this scenario is played, both dwarves will get bumped down to being captains, still tough but rather less superhuman.

I don't think Ric did anything wrong, and at the point his orcs crossed the bridge he was winning; however the super-dwarves proved an insurmountable and literal roadblock given his victory conditions. That said, the two dwarves fought side-by-side, which increased their potency and I wonder if they would have been easier to pick off had they been separated; if I'd placed the chief at the bridge for example, he would have killed a lot of orcs in the early stages of the game, but might have been overrun, leaving the son to guard the mule train alone. Furthermore, if I'd placed the chief at the bridge, there would have been no one to start loading the mules until the son got there from his starting position in the fourth or fifth turn. As such, I think the placement of the dwarf chief was crucial, and it's interesting that I was convinced early on that I'd made a mistake starting him with the mules.

I hope Ric wasn't too disheartened by the loss -- it looked much worse on the score sheet than it seemed in play -- and I'm looking forward to the next instalment, pitting more orcs against a garrison of human soldiers. Stuart says he might run this scenario a couple more times and average the results, because as it stands the orcs will be sending no representatives from this battle to the big finale at Orc's Drift.

UPDATE: Stuart has also posted a report on the battle.

PDF
Posted by thekelvingreen at 12:56