The Jolly Butchers didn't venture out onto the mean streets of Marienburg last night, as Steiner Eriksen was laid low by some Nordic ailment, so instead we broke out the newish Mansions of Madness board game from Fantasy Flight. 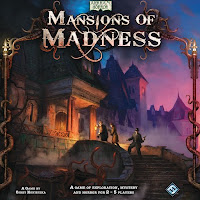 It's in a similar vein to Wizards of the Coast's Castle Ravenloft and Wrath of Ashardalon in that it's a tile-based exploration game intended to emulate, at least partially, a tabletop rpg. In this case, the emulated game is Chaosium's Call of Cthulhu; Fantasy Flight already produce Arkham Horror, which is in the same milieu -- and indeed Mansions is part of the same line, although the games seem to be incompatible - but Arkham Horror is at the summer blockbuster special effects end of the scale, while the newer game is more of a low-key horror movie type affair.

In the game, players are sent into one of the titular buildings to track down some MacGuffin, along the way encountering various gribbly beasties -- axe-wielding maniacs seemed to be popular in our game -- and sanity-shredding shocks. While the D&D games mentioned above feel like stripped down and simplified versions of the parent system, Mansions is very much its own thing, emulating a Call of Cthulhu investigation but not attempting to replace Chaosium's original game; for one thing, mysteries seem to be quite linear, which isn't an issue in the board game, but would kill the rpg equivalent stone dead.

There are some neat mechanics -- there were some grumblings about the card-based combat system, but I quite liked it, and am already thinking about ways to import it into an rpg -- and there's an interesting balance of play between the investigators and the Keeper -- the player who runs the Mansion's monsters and effects -- with a larger party giving the Keeper more options for mischief, but also enabling the group to search more thoroughly, for example. There's also a fun time limit mechanic, which came into play in our game last night, as we rushed to the finale with one turn left and had to kill an undead creature; the gangster fired two bursts from his Tommy gun -- missing with the second -- and the detective did the same, leaving the hobo to wrestle with the thing -- having dropped his axe in an earlier fight with no time to recover it -- and needing to roll a 7 or less on a d10. It would all come down -- literally -- to the last throw of the die.

A tense ending then, but still good fun, and I'd be very keen to play again. The system enables the same mystery to be explored up to three times, with differing paths through the plot, and I'm interested to see how that works out in play. All in all, it's a good fun game, and in many ways I prefer it to Arkham Horror, not least because it's much faster in play. 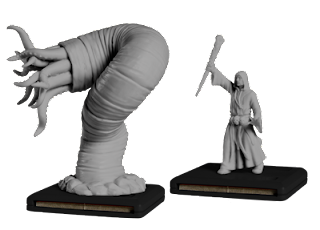 I'm not sure I would ever buy it though, as I don't think it offers good value in its current form. It's an expensive game, but I wonder how much of the cost comes from the thirty included plastic miniatures. The designs are rather uninspiring, and the miniatures themselves are completely superfluous; each has a slot in the base into which is inserted a little token, much like the ones from Arkham Horror, on which is a picture of the monster -- or rather a picture of the grey, unpainted miniature, which strikes me as a bit cheap -- as well as all its game statistics. As such, all the miniatures seem to add to the game is price; I'd have much preferred to see the game use the tokens alone, and the extra cost either dropped or used to provide more monster or layout options. After all, Arkham Horror does just fine without plastic figures.

That is my only criticism of the game -- admittedly based on only one evening of play -- but it's a significant one, and one that prevents me from recommending the game to others, let alone buying it for myself. That said, now that the group has it, I'm keen to play again, and I'm quite interested in taking a turn as the Keeper.

Based on gameplay alone, I'd give Mansions of Madness four out of five, but the pointless miniatures bump it down to

PDF
Posted by thekelvingreen at 10:46