Show Me Your DIce

We're all dice fetishists to an extent, a tendency Tim over at Gothridge Manor has identified and decided to celebrate. So without further ado: 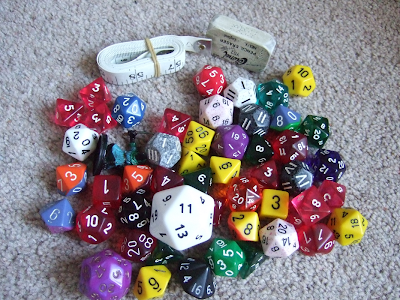 These are the contents of the bag I take to our regular games. There are a couple of full seven-dice sets in there, a d30, a d16, a bunch of two-tone d10s, a handful of d8s, a couple of twenty-sided d10s and some twelve-sided d4s. There's also a tape measure in case of wargame-type activity, a decent rubber because the ones you get at the end of pencils always smudge the character sheet, and a plastic tengu from the D&D miniatures line; this is Wu Ya, my character in Ben's Kingmaker game. He's a monk with the potential to bust out seven attacks a round, so I have quite a few d20s in the pile; there's one for each colour of the rainbow, in case order of attack is important, and a few extra just in case. 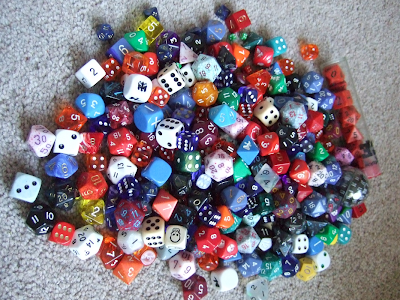 This is everything else. It may not look much bigger than the other lot, but this is a pile that's a couple of inches high in the middle. The bulk of it is made up of a Chessex Pound o' Dice bought by a sympathetic relative one Chrimble, but you've also got a few seven-dice sets -- including one still in its case for no apparent reason -- and then a fair number of odd dice. There's a Zocchihedron, an inkless precision d20, a set of FUDGE dice, some of those funky third edition WFRP dice, a set of HeroQuest dice and a spare set of Blood Bowl blocking dice acquired from the NAF. Most of these dice go unused -- we haven't played WFRP3 yet and a Zocchihedron is to be admired, not rolled -- but I doubt I'm the only one with such a reserves pile. There's something satisfying about tipping them all out then putting them back in their box, akin to when I did the same with my Lego as a child.

PDF
Posted by thekelvingreen at 19:18