Head in the Clouds

As the games are turning over like a huge discworld sized pancake, I have taken the opportunity to run a stopgap 2 episode Star Wars until the DnD is ready to rumble. The original West End games D6 edition no less. Despite the D20 system prevalence I like the older system due to its rather vague approach to rules - its enough to get things done but allows a high degree of flexibility by the GM and the extremely simple difficulty tables are applied to most tasks - combat is simply an attack roll vs strength roll. 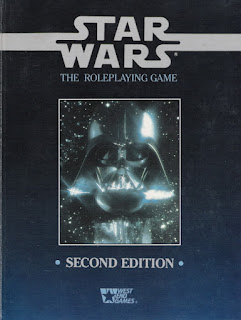 For now the party are trying to rescue an Ambassador Bol, a wanted Jedi, who went MIA during the last Star Wars adventure. He was pivotal in establishing the first few clans into an alliance against the Imperium. 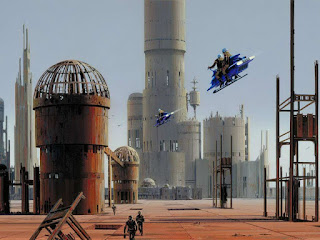 At this moment in time, although it was a long, long time ago, our adventurers are on the trail of a broken light sabre that was found to have been gambled away in a casino on Cloud City -a Calrissian mining facility suspended within the Bespin atmosphere. Having abruptly cornered the gambler concerned it turns out that he claimed the item from the now defunct Tibann orbital - an old and ultimately unsuccessful competitor to Cloud City that has fallen derelict - uninhabited for now except for scavengers and scrap hunters and anyone else not looking to be found...Part 2 on Thursday...