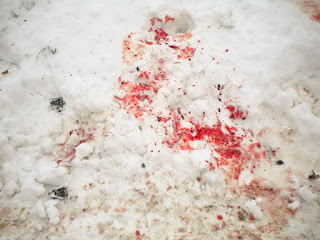 When you’re forced to leave the game early due to circumstances beyond your control, there’s always a chance you’ll have to bring a new character for next session. Fortunately, our werebear player decided to make his character into a proper Engine of War and his trait, Warrior’s Restoration, allowed Devlin to heal up the hole in his side in an hour.

As impressive as that may sound, it’s even more impressive that Devlin managed not to punch the hunter who shot at him. In his defence, he thought he was shooting at a polar bear. While VT flew off to get her gun, Devlin and Peyton met with some hunters and had a chat. Most of them wanted to finish it quickly solely because Devlin has a reputation of punching people for no reason… even if they have guns.

During their chat, Peyton noticed that the hunters were wearing similar clothes as that severed armed that nearly hit him during the blizzard. Oddly enough, the players decided to try and track down the beast, now nicknamed Windy by VT. Sadly they lost the track. The wind and snow destroyed what little signs they could follow. The only thing they were sure of is that Windy headed for the town… and that it disappeared in mysterious circumstances.

I’m extremely glad Bill noticed that although VT was perched on a building overlooking where Windy would have emerged, she saw naught. Normally, you could hand-wave that as a simple plot hole but I do have a reason as to why Windy vanished. A reason which I shall keep to myself… such is the beauty of Game Mastering.

With so little to go on, our heroic shapeshifters went back to find the severed arm and piece together the identity of the victim. His name was Jonathan and none of the characters knew of him having any ties with the local hunters. Being the good citizens they are, they informed the local authorities who, quite sceptically, sent a state trooper with them to check it out.

The disbelief vanished quite quickly and was replaced by a visage of horror!

The site was secured, CSI was called in and statements were taken.
No other player got shot at.
For now…