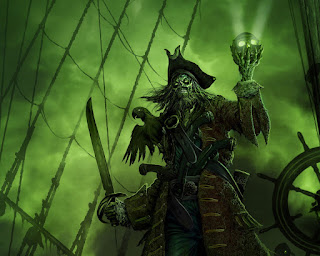 Our DnD adventure is taking us down the coast at present, by land I might add, as what with mysterious fog banks and a wandering ghost pirate ship we are quite happily sticking to terra firma. Our current mission was to talk to a druid local to one of the fishing villages to try and get some information on some of the background happenings around Neverwinter but worryingly we passed at least one village that had been raided from the sea and its inhabitants either killed or presumably captured. I suppose missing at sea would be the correct description for them now.

I would guess that ordinarily Pirates carry out raids for various logistic reasons, water, food and also for slaves or possibly new crew members as well as for the usual collection of loots. However, what a Ghost Pirate ship raids for is less clear to me. Potentially they could be collecting more crew albeit of an undead variety but I wouldn't have thought they would have a large turnover of staff...unless bits drop off during the working day. A rigger with no legs is not going to do well in his next performance evaluation.

Either way I suspect that they are either cursed and or operating under the will of a more malevolent force.

I think I am working out why it is called the Sword Coast. 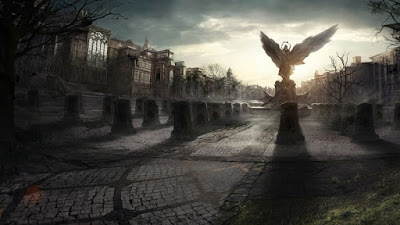 Moving inland we had a meeting with the curators of a vast, rolling cemetery and once again they hve said that the passing traffic seems to be much busier these days for no particular or obvious reason. Connecting the dots, it would be  reasonable to suppose that someone is stealing bodies though we have yet to catch them in the act. I think the next question would be to ask for an audit but this is often met with an extremely grim demeanour in any profession let alone from the curators of a cemetery as large as East Sussex.