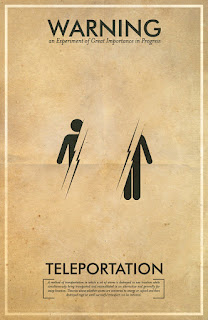 Ritual circles, triangles, pentagrams, menhirs, and glowing flagstones are all things that should really have those 'slippery surface' warning signs. It always a little disconcerting trying to work out whether you are dead or not after being teleported.

Having wandered around a gigantic cemetery for a while we followed some humanoid claw like tracks to a large mausoleum and a sarcophagus within. It was fairly evident that  this was all a bit of a neat and tidy arrangement particularly for an old burial chamber, so much so that one could hear the time honoured Admiral Akbar screaming "Its a twap" in your ear. The funny thing about this is not that we didn't see a trap coming, it's that we hadn't realised that the trap was disabled by 4 magic gems to be found in the murals about the coffin. Not a problem...except that there is a thief in the party. It was a deliberation though but eventually the thief did see the down side of dying a rich man but of course went back for the gems afterwards. 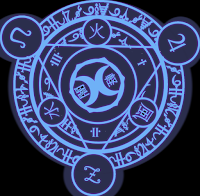 Spiralling down and around brought us finally to the afore mentioned teleport and off we go.
Unfortunately, to continue the Star Wars theme, as it is nearly Christmas, we seem to be in a fighting pit Jabba style, surrounded by a very excited crowd of cobolds, hot dogs and popcorn in hand with something growling on the other side of some very big doors.

So the extent to which we teleported without dying is still a debateable point but what advice to give before stepping on a portal ? Pack swimming trunks and heavy weapons. 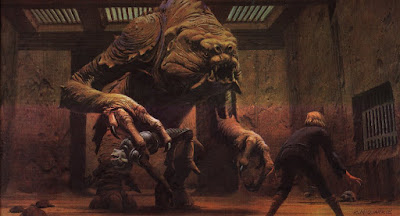