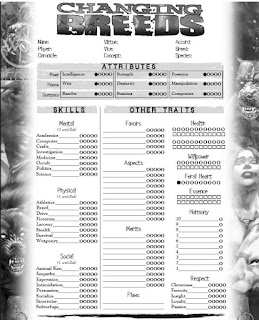 'Any ideas as for characters you'd like to play?' I asked.
'An adrenaline junkie werefalcon.'
'I think I'll play a polar bear lumberjack.'
'Together, they fight crime.' Bill remarked.

Actually, that's a very good description of the scenario I have in mind... mostly because murder is generally considered an illegal act.

It's been a while since I've last run a game. I used to do it fairly often but even so, I was dreading sitting in the GM chair again.

I started off with two players, had elevator-pitch for the game and felt like my handling of the system was sketchy at best... but as we sat down and bantered, I felt happy to be were I started.

Last week we did character creation.
We didn't do as much as I had hoped and I'm at fault here. I intended half of the 2 hours we had to be spent making characters and the other hour on fitting them into the setting but I was worried that putting dots on the sheet would go fast that I feared all would be done in half that time... it didn't.

No plan ever survives contact with players, mark my words!

Fortunately, the sheets require minimal input from the players and I started working on some additional player characters for drop-ins.