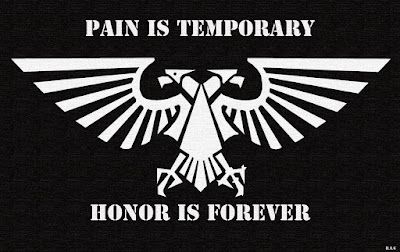 This last Saturday saw the reprise of GM Warren's Earthdawn adventure at the Dice Saloon. Although I have dropped into the venue on a few occasions, it was the first time I had been there at peak time and by Jupiter it was busy. Whilst our party had rented their own table there were card game players of various systems dotted around, a very forgiving purveyor of coffee who was quite patient as I changed my order several times and a large contingent of people at war. These would be the Generals and Commanders of the Warhammer armies out manoeuvring each other on wide tabletop battlegrounds. 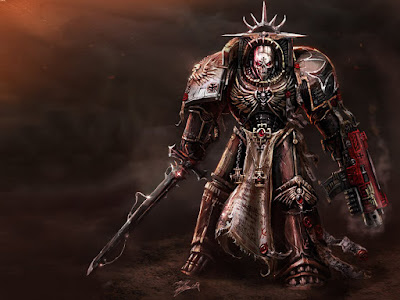 Whilst Warhammer doesn't appeal to me directly as I prefer the more creative aspects of narrative, I was struck by the heavy atmosphere of such confrontation. Whilst a civilised and orderly progression of battle was mediated by opposing players there was definitely the air of one side wanting to utterly crush the other. Even from a distance the two rows of opposing players gave an impression of no quarter as rules were passed back and forth for scrutiny and ranges were checked and double checked across the field using personal measuring tapes before orders were executed; it was a definitive war room. I  must have been there an hour or so gingerly listening to the Earthdawn but often the presence of the Warhammer would catch my eye as battlefield resolve and determination swayed its own tug of war above the gaming table. Basically, now I can understand the appeal, though I am ultimately much more at home with a cup of tea, biscuits and a familiar. 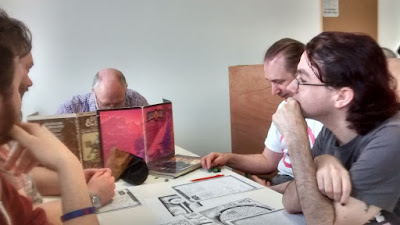 Neverthless the Earthdawn was a delight to listen into which, ironically, despite its name, is set underground. I joined at the point where a Troll, Elf, Dwarf, Obsidiman and Windling all walked into a bar. More specifically the bar was on fire and hidden in magical darkness. As amusing as it was to watch the obsidiman debate himself whether to turn right or left as traditionally they are a little slower than Ents when making decisions, I got the impression that they were after a bowl of some sort whilst trying to make sure that people were as safe as possible.. its a bit like turning up to a party when everyone else is drunk so I only got the general idea of a plan in motion but it seemed that no one died on this occasion. As to the fate of the bowl, well, I will find out this Thursday. 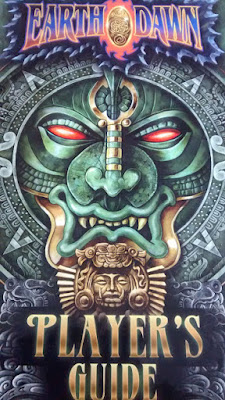