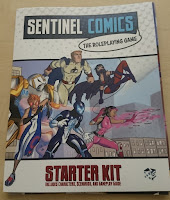 Going to the club this week knowing I’ll be back in the GMing seat was as exhilarating as it was nerve-wracking. I’ve been looking forward to running the Sentinel Comics RPG for quite some time now. Partly because I’m a fan of the superhero genre and partly because I have thoroughly enjoyed the setting presented in the card game, Sentinels of the Multiverse, which this Role-Playing Game is a continuation of.

I’m not going to lie that I wasn’t nervous. I had to present a new system to a group of players when all I knew was derived from reading the rules and watching gameplay videos on YouTube. Then I had to give people some background information for the setting. All of this got me worried that it might end up being a very tedious session.

We start this issue with the Freedom Five (guest starring Unity!) helping with the reconstruction efforts in the city of Megalopolis where the massive Akash’Flora tree currently resides. The city suffered tremendous damage during the OblivAeon event a few months back when a cosmic entity came to Earth to destroy the concept of reality once and for all. This caused all heroes and villains across dimensions to put aside their differences and fight OblivAeon. 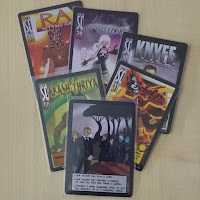 Many have perished during the struggle. The Hero Nightmist sacrificed herself to open portals to other dimensions to call for help across the multiverse. Among other fallen were the Freedom Five’s arch-nemesis Baron Blade, the time-travelling La Comodora, the ever supportive Scholar, Knyfe, even the Egyptian god Ra died in Fanatics arms after he united the other Egyptian gods to lead the most effective assault at OblivAeon during the entire struggle. It was a difficult but now came the time to rebuild and move on.

The devastation left by OblivAeon was plain to see throughout Megalopolis. Tents were set up in areas for those who have lost their homes. Teams of scientists were scanning for ambient cosmic radiation to see which areas were still habitable. Construction companies were running round the clock to make the city operational again. Meanwhile, the Freedom Five did their best to help. Bunker held up a piece of a fallen bridge to allow traffic for the construction companies. Legacy kept an eye from high above for any workers who might be in danger of becoming falling debris. Tachyon sped around town bringing medical supplies to the needy. Unity assisted the scientists and Absolute Zero gave out ice cream to children.

Suddenly, out of the sewers, crawled mail-box sized spider-like machines. They quickly scanned the area and zeroed on the heroes! As noted by one of the players, this was a tutorial fight meant to show people how the system works in practice. During the one round we played we had Absolute Zero freezing the robots from a distance, Bunker and Legacy charging into them, Unity giving tips on the robots’ weak points, Wraith throwing knives and retreating behind a building, and Tachyon making a quick detour to get some burgers before eliminating an entire group with her super-fast punches. In retaliation, the spider-bots assaulted the heroes with their claws and webs. 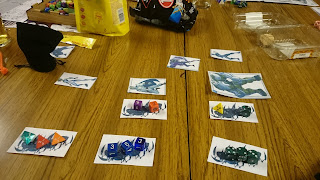 Unfortunately, due to the weather conditions that day, we had to end the session pre-maturely. Normally we would have played for another hour but, instead, we went outside and had a snowball fight. 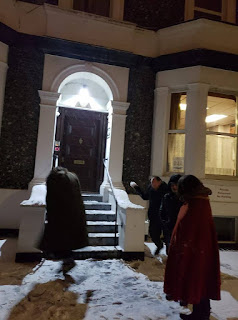