Running From the Past

I blame the internet.

Stuart started it in his review of Interface Zero; a casual mention of Shadowrun got me thinking about the game again, but it wasn't until JB started a series of posts on the game that I caught the bug and dug out my copy of the second edition. 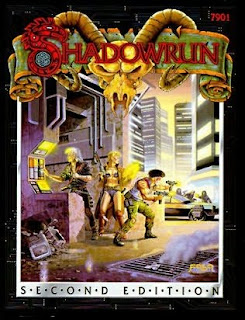 Shadowrun was my first proper role-playing game. I'd played a bit of the multiplayer Fighting Fantasy, and I was aware of the hobby, but I was more interested in Games Workshop wargames at the time. My main gaming buddy at the time introduced me to Tim, who showed us this box of miniatures he had; they were fantasy types, orcs, dwarves and the like, but they had sunglasses and machine guns. Tim told us that they were from a game called Shadowrun, and invited us to play. From that point, we played Shadowrun for about three years, although oddly enough, I don't think we ever used the miniatures.

Through Shadowrun and Tim, I discovered more games, including my first -- and until a couple of years ago, only -- encounter with D&D, and a disastrous dalliance with Traveller: The New Era. Somewhere in there, I fell in love with Call of Cthulhu, but Shadowrun was always a constant, and it was only really Tim's departure for university that ended our time with the game. I played a bit of the third edition when it came to be my turn to enter higher education, but it didn't click with me and I left it behind. Up until a couple of days ago, that was the last time I looked at a Shadowrun book.

Looking at it now, I'm surprised at how much of the system we didn't use. It's what would be called "crunchy" nowadays, in that it does not attempt to have a rule for everything, but goes into great -- and likely unnecessary -- detail on the situations it does cover. Given my tastes of late I'm almost certain that if I ran it today, I would not make use of this detail, but that's not to say that I wouldn't run it at all, as there's still a lot to like.

The central mechanic is elegant and quick, one result of which is an unobtrusive close combat system which does its job without fuss. The drain mechanic -- the downside to spellcasting, in which casters risk taking damage from their own powers -- is a great idea, and is perhaps my favourite part of the entire system. The second edition also contains almost -- there's no adventure included, which is a shame -- everything you need to play, and all in a book about the same size as a D&D player's handbook; now Shadowrun was also the first time I encountered power creep, and Tim had a stack of supplements about a metre high, each of which gave one type of character an edge over the others, but none of them were necessary, and the game runs just as well from the core rules alone.

Except for decking. The computer hacking system in the second edition rules is a mess and while it was improved by subsequent sourcebooks, it never quite worked, and I can see why so many GMs just dumped the entire aspect of the game. It's a shame, as it's one of the key topoi of the cyberpunk genre, but the game is perhaps better off without it.

One other criticism of the game, in particular the older editions, is that it's dated, and it is true that there's a definite 1980's feel to the setting, but to me that is part of the charm.

It's more a product of its time than an accurate prediction of the future, but that doesn't make it of any less value as a setting, just as the outdated notions of the 1930's and 50's don't make a rockets-and-rayguns setting any less fun today. Any game which lets you play a grenade-launcher-wielding elven rock star or a motorcycle-riding ork wizard is just fine by me.

PDF
Posted by thekelvingreen at 19:37