Player: I'll put the kettle on.

A proper old-school GM cares not one jot for detailed maps of every street of every district of the City of Genericfantasyburg, because the old-school GM will just roll on a random table to discover what's round that corner or behind that door. I don't know him aside from his blog persona, but Zak S. -- it stands for Sabbath or Smith depending on which hat he's wearing that day -- seems to prefer this philosophy of generating random data and trying to sort it out at the table, but with Vornheim he suggests that even random tables aren't quite fun enough.

Vornheim also represents an explicit dissatisfaction with the rpg book as a format, that as game books, they're perhaps a bit too bookish and aren't nearly gamey enough. Zak wants them to be more than just containers for text -- this is reflected, consciously or not, within the city itself, where snakes are the medium of choice -- and as such Vornheim is a thing to be used, a bundle of mechanics and tools, a -- you knew it was coming -- kit that only takes the shape of a book, for lack of a better format.

Imagine I want to generate a city location, so in order to do so, I use the front cover of the book. I adore this. It's the author saying "I don't want the cover to just be the thing you stick the title and a pretty picture on, even if I am an artist; I want you to be able to get an actual use from the cover." The idea is to maximise game utility, because the prettiest painted cover image is of about as much use as a chocolate fire guard if your players want to know what's behind that green copper door. 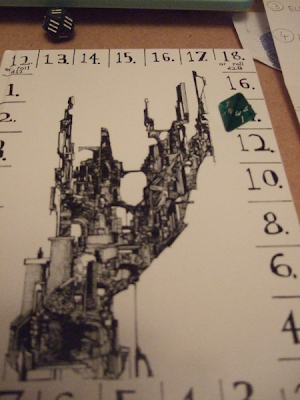 So, I want to generate the location. I get a d4 and I roll it -- this only works with the pointy types; my fancy twelve-siders just roll right off the book, off the table and into the dark corners of the room, where the spiders dwell -- onto the cover of the book itself.

It's not just cute and fun -- though it is that too -- as this kind of innovation is also there to make the generation of game data more useful and efficient; the exact same roll gives us a fighter with an Armour Class of 18 or 2 -- depending on D&D version -- of second level, and wielding a sword. The same chart can also generate an animal, monster, thief, wizard, group of city guards, inn, two types of internal room, two types of magical attack, and a poison. There's another very similar chart on the back cover, and the book contains a number of different pages that operate along similar lines.

Not all the material in the book follows the same format. There's some prose description, maps, a couple of keyed map adventures, and more than a few random tables, but these are all infused with the same sense of trying to do more with such tools, to not fall back on what is expected of a city-based rpg sourcebook. This informs and supports the general approach of describing Vornheim through examples, rather than present an encyclopaedia of every street, house and citizen.

That said, the GM is given the tools to generate such elements as and when they are needed, and more importantly perhaps, to make them interesting and dynamic when they do come up; Vornheim rejects the mundane, conventional and boring, and this attitude is apparent on every page. The stated goal of the book is not only to allow a GM to create a city on the fly, but to make it interesting, memorable and fun, and I would argue that it more than succeeds in that task.

It is rather D&D-centric and I don't run D&D, but that's not the fault of the book and it's not as if Zak's blog title doesn't make it very clear what his game of choice is. It's not a huge problem by any means, as the book uses so few actual statistics and rules that it's easy enough to convert to one's chosen system, and besides, my key interest was in how Zak pushed the boundaries of rpg sourcebook presentation, and that's something one can appreciate irrespective of the game system. 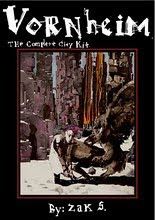 The book could have done with another editing pass perhaps, as there are some glitches here and there, such as missing table headers and a couple of cases of repeated and redundant information. In places, there's also some repeated and redundant information. Even so, these glitches are few and none of them have any negative effect on the utility of the book, and that's what counts at the end of the day.

To compare Vornheim to the perennial Best City Book Ever nominee Ptolus is perhaps not fair -- although I sort of just do that, oops -- as they're very different products with very different intentions, and to say that one is better than the other seems a bit pointless. Let it be said then that I prefer Vornheim, even as an infrequent fantasy GM, because it strives to be more useful than exhaustive, and because I admire and support the genuine attempts to do something different within the format of the rpg sourcebook.

Vornheim is a sixty-four page A5ish hardback book, more or less compatible with most versions of D&D -- even the Unmentionable -- and is available from the Lamentations of the Flame Princess shop for 12.50€. It's well worth every whatever-pennies-are-called-in-the-Euro-is-it-cents-I-don't-know.

PDF
Posted by thekelvingreen at 19:34